Like other cities, Penang is losing more and more of the old ways. Artisanal businesses show us how some things are best done the traditional way.

For an 86 year old, Mr Sim Buck Teik has aged well—he carries himself upright and still maintains quite a wiry, muscular frame. All those lines etched onto his face give him a distinguished gravitas. He’s sitting in a rattan armchair outside his shop when we walk in, watching the cars whizz by on Beach Street and checking out his neighbours’ activities. His wife sits nearby in quiet companionship. This seems to be a regular afternoon habit for them. But when he gets up to demonstrate the rudiments of weaving a round basket, this strong, silent man—clad in a classic sleeveless thin white shirt, the Pagoda type from China—transforms into a dancer. Stepping on the circle of thick and stiff rattan rods sticking out like spokes of a bicycle wheel, Mr Sim moves his agile feet over the rattan to flatten them. He bends down to weave a flattened rattan rope in and out of the rods. And this, is how the “tua lang” (in Hokkien dialect for big basket) takes shape.
In the mid 1950s, these baskets were popular among the Chinese who would send goods to China to help relatives tide over the Great Famine. Mr Sim is believed to be one of the last remaining rattan weavers in town with the know-how to make these baskets. The owner of Seang Hin Leong rattan shop on Beach Street had learnt his trade from his father. But only at a later age, in his 20s onwards, because he was sent back to get schooled in China.

“I was born in Penang, but my father had sent me back to China,”says the octogenarian of Teochew stock. His grandfather had started the business in 1925, and one of the reasons why Seang Hin Leong still exists is because they own the shophouse themselves.

Mr Sim is retired now, but luckily, his son, Chew Poh, in his 50s, is carrying on the trade. Most of the goods in the shop today aren’t woven by the Sims but they still do a few themselves and would still take commissioned work. Craftsmen like Mr Sim have been recognised since the mid-2000s, with the establishment of the Living Heritage award by the non-governmental organisation Penang Heritage Trust. Penang is fortunate to still have a few artisans around town, especially now where there is a revived appreciation for the traditional and handmade.

Mr Murugesan pulling out the long gold strip made from a single nugget—after it went through three presses.

A pair of bridal earrings made from crystals and gold.

A few streets away, Indian goldsmith Mr Raju Murugesan, in his 50s, still produces jewellery the traditional way at Thana’s Gold-smith’s shop. Mr Murugesan sits wedged against the wall between his wooden worktable, where he works, and a glass cabinet, where he consults with customers.

It’s fascinating to see your commission —if you order a chain, for instance—being made in front of you. Mr Murugesan melts a gold nugget in a small ceramic bowl with a handheld torch, and then the liquid gold is poured into a mould, picked up with tongs and cooled in a bowl of sulphuric acid. Then, the goldsmith patiently runs the nugget to and fro a mechanised press, like sugarcane. “This machine is from India, yes,” says the laconic man.The nugget slowly gets flattened into one long and flat gold strip—and using this, Mr Murugesan will punch holes or add carvings and gold beads to make a necklace. His wife, Ms M Thana, says there’s still quite a consistent demand for traditional and customised jewellery and common pieces are the thali chain, pendants, toe rings, and crosses. “We charge rm115 per gram for the workmanship, and then whatever the price of gold is,” she explains. Just down the road towards Chulia Street, at the side of a shrine dedicated to a holy Muslim teacher from India, Haja Mohideen hardly ever looks up from his sewing machine even though different friends drop by to chat while he’s sewing.

He was 12 years old when he first learnt to make a songkok—the oval-shaped headgear worn by Muslim males. Now 66, he had started learning the trade from his father who also worked at the same premises. He also makes the Turkish-originated tarbus, a taller round cap with a black tassel, and the round kopiah used by Haj pilgrims.

The headgear is made from simple cardboard and cloth, but putting it together takes some precise science. Creating the circular band is the first step—where magazine papers and newspapers cut to size are layered with cloth and run through the sewing machine several times for a diamond-like pattern. Then the oval crown is created, also made from layers of paper and cloth, and then the two pieces are lined with velvet cloth before they are fitted and sewn together. “I get orders from all over, and whether I sell you one or a lot, it’s the same wholesale price,” he says affably. You can find Haja Mohideen sewing and cutting away at his little shop from 11am to 9pm almost every day, breaking only for a late lunch—with the aide of his nephew who does the prep work for him and also handles the packaging and sales.
There is hope yet for some traditional wares and food, especially when businessmen are quick to pick up on opportunities. “My father made me do it,” says M. Kumaresan Mariadas matter-of-factly, when asked how he came into the business. Mr Kumaresan’s story is that of succession. His father already had a bakery, but when he heard Ismaliia was selling the bakery and the business in 2006, he bought it, and put his business administration-trained son to the task of managing it. The bakery was then renamed Maliia.

Mr Adam has worked at Maliia for over 40 years.

Evenly baked loaves in a row.

Maliia is best known for its traditional hard-crusted Roti Benggali (bread), with a recipe dating back to 1926. The bread itself is quite basic—flour, yeast, water—but it’s the proportions that yield that chewy white inside with a smoky and crispy crust. Most of the workers opted to stay on, like Adam bin Mohd Ibrahim, who had worked there for more than 40 years. Mr Adam is the oven guy, as he keeps a trained eye on the two room-sized ovens to check on the done-ness of the bread.

To produce some 1,000 loaves a day, the bakery runs on a twelve-hour baking cycle. First the flour is mixed in machines, and then the workers pull out the dough and knead them into 3kg dough balls. They are then put through an automated bun divider. The divided dough then gets placed into the baking cases—eight in a case—where they rest for another hour or so, before they get put into the oven. One oven takes 120 cases.
Baking takes an hour, and then Mr Adam yanks them out of the rotisserie-like oven and the hard-crust loaves are tumbled out of their cases. “Because we don’t use any preservatives, it’s best to eat the bread in three days,” advises Mr Kumaresan. “The bread is then distributed through agents who pass them to the individual bread sellers, but we also make to order, like for Penaga Hotel across the road,” he explains. 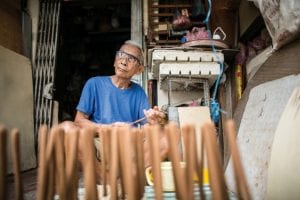 Time is running out though for some artisans like joss-stick maker Mr Lee Beng Chuan. In his 80s, Mr Lee makes these joss sticks—either in six or ten-inch sticks—most mornings outside his little shophouse, behind the famous Kuan Yin (Goddess of Mercy) Chinese temple on Jalan Masjid Kapitan Keling. He used to run a shop selling prayer paraphernalia but started making the joss sticks more than a decade ago. Shaping his joss stick paste—made from Australian sandalwood powder, water and gum—with his fingers, he looks like he’s playing with chocolate plasticine. But his pinches of the paste are precise, before he evens out the paste along the bamboo stick. There’s a strong scent of sandalwood in the air, and he wears the oversized glasses so that the powder doesn’t affect his eyes.

The joss sticks are then dried, smoothened, and dried again for two days. Sometimes, he’ll even inscribe onto the joss sticks—words like longevity and good health. “I’ll change the thickness or the length after a while, because when you’re doing handicraft, you must change your style.”

Enjoy spending credit when you book with us