The Peranakan culture harks back to the time when Chinese immigrants intermarried local women and adapted their material culture, while remaining quintessentially Chinese in belief and philosophy.

The late 19th and early 20th centuries saw Penang at its height—with the flourishing of the Chinese business community in tin-mining and trading (opium, among many commodities). The immigrant southern Chinese were completely at home with a foothold in a few worlds: on this tropical island in southeast Asia they’ve planted themselves in, in China (through wives in many cases), and they were in pace with the British government system and order of life in the Straits Settlements.

Penang’s rich Peranakans (the Malay word itself means a “localised community”) commissioned houses, furniture, china, clothes and jewellery at the height of their renaissance to show off that they’re the citizens of the world.

It was a community that felt it was very cosmopolitan and prosperous, so what did they do? They expressed their cultural hybridity and cosmopolitan tastes through how they lived, what they wore and ate. While an exploration of George Town’s architecture will give you a glimpse of its glory years, it’s the restoration of buildings like the privately-owned Pinang Peranakan Mansion, which is also a museum, and its extensive collection of Peranakan treasures that will truly impress on one the jaw-dropping wealth of the state’s Chinese more than a century ago.

The bungalow that used to belong to a high ranking leader in Penang, built in 1894, is the very epitome of wealth gone wild—with gilded doorways and intricately carved doors, and the best of the best from the whole world they could get their hands on. It’s a virtual builder’s paradise—ironworks from Glasgow, floor tiles from Britain, Italian marble, and stained glass from Venice—fitted into a classic Chinese courtyard mansion replete with fengshui details.

The high ranking leader, or Kapitan Cina (Chinese captain), was Chung Keng Kwee, and though he wasn’t a baba—a Peranakan male—he lived like one. The bungalow had fallen into disrepair by the middle of the 20th century, but it was bought and given a stunning makeover in the early 2000s by an avid—almost fanatic—antique collector, Peter Soon. As a result though, the public lucked out as the house is a fabulous representation of the Peranakan culture at its absolute gaudiest and best.

The babas saw themselves as the Queen’s Chinese and they were anglophiles,” explains Lillian Tong, the museum’s curator and really, its best ambassador. 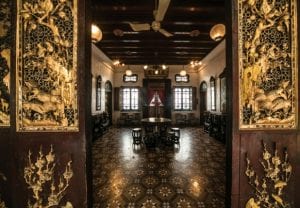 She’s the go-to expert at the museum, so if you see an elegant lady garbed in a figure-hugging nyonya kebaya outfit, try to stick close to her and listen in on her guiding, with permission, of course. The Peranakan renaissance in Penang was really the baroque period, she describes, because it was the meeting of the Chinese Qing and Victorian eras. The Qing were less scholarly than the Ming and a lot showier, while the Victorian era was the belle epoque period—so is it a wonder that what resulted was flowery and fancy? 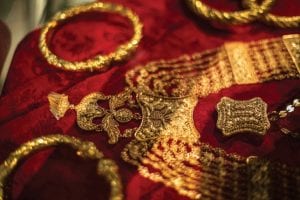 Anyhow, all this is to say that the Pinang Peranakan Mansion is a must-visit in your Penang itinerary especially as the owner has recently rented the neighbouring house and turned that into an amazing showcase for Peranakan jewellery. After all the bling, do take note of the small collection of stylish mourning clothes at the end. Also, while there, don’t miss out on the family ancestral hall. It has been maintained pretty much in its original condition—and it’s here that the austere grey granite and pared down functional design is at its most philosophically and aesthetically Chinese.

The Pinang Peranakan Mansion is the finest example of revived Peranakan glory, and no one can build bungalows like these anymore, but thankfully, there are other artists and artisans in town who continue to draw inspiration from this incredibly creative era.

At Jonathan Yun’s workshop, where the jewellery is carefully made by hand.

The jeweller and one of his designs

Jewellery designer Jonathan Yun is a modern-day artisan who’s found new ways to interpret Peranakan jewellery since two years back. One striking series is his recreation of the paisley-shaped ibu kerongsang (mother brooch) as a pendant, hanging from stingray skin-covered neck cuff. He’s also created miniature versions to popularise the design. “Note how the point is curved to the left, and this is supposed to be pointing to the mother’s heart for her children,” he explains.

Since returning from Singapore where he had first worked with a design company, Mr Yun has been blazing a bold trail in handmade, designer jewellery in silver and gold—drawing on cultural as well as nature-based inspirations. 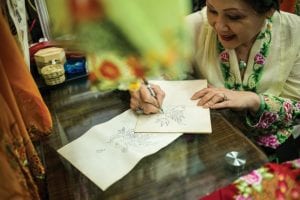 Cecilia Lim is another modern day artist, but fabric is her material of choice instead of precious metal. Ms Lim had always loved to draw, she shares, even as a young girl. So when you have aunts who specialised in making nyonya kebaya, the Malay-inspired floral embroidered top that Peranakan ladies wear, you start to draw the flowers and birds that get embroidered onto the Indian cotton voile or chiffon. The peacock is her signature design and it’s a motif that she thought up while on holiday eight years ago. Other popular classic motifs are the dragon and phoenix. She also does the goldfish and koi, but of course, flowers are standard. She draws the designs which are then expertly embroidered on the front and triangular ends of the kebaya top. “I also pay a lot of attention to the colours to make sure they match,” she adds. “And I ask customers to bring their sarongs with them, the one they plan to wear with the kebaya, to make sure we get the right colour combinations. Or I can choose the batik for them.”

The embroidery and stitching is another artform in itself, as the tailors have to manipulate the machine in a certain way for the embroidery. What are the popular colours among ladies? Red and pink for the brides, or pearl, and then for the mothers of the brides, darker colours like maroon or deep purple.

To complete the nyonya trousseau, ladies then would have to head to Hong Kong Shoe Store, which makes hand-beaded shoes to order. This is, incidentally, the shoe store that renowned shoe designer Jimmy Choo apprenticed at as a young man. Owner Wong Heng Mun’s father was the one who taught Choo the rudimentary skills of cobbling before he went to study design in England, and made a name for himself there as shoemaker to the famous and rich.

But back to beaded shoes. One would have to order these shoes about six months in advance, and these days, most designs and customised shoes cost above rm500. Mr Wong says that they have been providing the service since the 1950s and that beaded shoes continue to be popular. Women often come in with their own design, or pick one from Mr Wong’s catalogue. Flowers are the most popular design while birds come a close second.

By the looks of it, it’s still possible to get togged up in Peranakan finery today and even give it your own customised twist. This would set you back by a couple of thousand Malaysian Ringgit at least, but what price craftsmanship—especially when it’s getting rarer than rare in our modern world.

At Jonathan Yun’s workshop, where the jewellery is carefully made by hand.

The jeweller and one of his designs